Tips on Writing an Underwater Scene

Part of the How They Do It series

Jeffrey strapped on a scuba cylinder for the first time in 1967 and hasn't stopped. His early diving found him exploring the spring and sinks of Florida. Thus he spent most of his time in the dark, swimming vast miles through tunnels and enormous grottos where the walls and ceilings disappeared. Then he entered the ocean off Palm Beach and fell in love with reef diving.

Upon continual persistence from his friend, Jim Abernethy, Jeffrey moved to West Palm Beach to become a part of Jim Abernethy’s Scuba Adventures where he was part of their famous shark expeditions, National Geographic shoots, and Flying Boat adventures. But one of his favorite things, if not guiding people along the reef, is to offer encounters with manatees to the different people he meets. On the day boats he loves telling stories about the rich and famous (are they all true?) and giving the history of our dive sites (true, but hard to believe). He also writes articles on Palm Beach dive sites when hurricanes keep him from diving. He's the author of Murder on Devil Ray Reef and Death at Obeah's Fire.

Take it away Jeffery...

I want to thank Janice Hardy for asking me to do a guest blog.

The ocean or any underwater scene can be a wonderful character in your story whether it is a minor or a major character. This salt water wonderland holds mysteries from ankle depth shallows to the Mariana Trench, which is 36,000 feet below the surface. Just think of all the secrets that can rise from there. You might be surprised to learn there are just as many unknowns within reach of a single breath.

There are a multitude of places our underwater tour could take place, such as: arctic, temperate, or tropical waters, shallow, scuba diving, or deep submersibles depths, and open water or coral reefs. The scene might take place in a natural habitat or a man made one, like a shipwreck or something like SeaLab. For today, let’s go with warm, coral reefs, with depths where a skin or scuba diver can dwell.

A significant part of all ocean life exists on and around the coral reef and in depths less than thirty feet. There are plants that look like animals and animals that look like plants. A very confusing world below the surface.

And as all writers always have a thesaurus or synonym finder and a dictionary at their fingertips, you should always have ocean reference books nearby. Very embarrassing to place a Pacific fish in the Atlantic waters. Some have migrated from one ocean to the other, but don’t assume all have or your readers may quit reading your book. Some excellent reference books by Paul Human and Ned Deloach are: Reef Fish Identification, Reef Creatures Identification, and Reef Coral Identification. 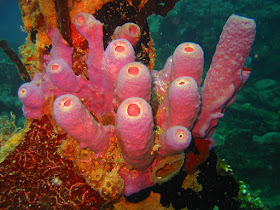 Something I like to do is to make the underwater world a character in your story, not just a location. And as a character, he needs to create lots of conflict and obstacles to your hero. Unless it is at the end of the story, then the ocean can be calm and friendly. Here are some hints on how to do that.

Whether your hero is skin diving or on scuba (the difference, a skin diver has 1 breath of air to dive down and surface where-as a person on scuba has a tank strapped to him) he has a limited amount of air. The more stress he encounters, the quicker he’ll use it. Plus, if he stays down too long, he will need to decompress at different levels to release the excess nitrogen he has built up in his system or he will experience the “bends” upon surfacing. This is always a great ticking clock, but it has been used multiple times. 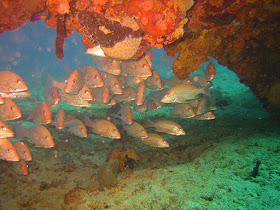 Your hero could always be bitten or eaten. Let’s keep away from the most often used. Sharks – used in “Jaws”, moray eel – “The Deep”, southern ray – sadly Steve Irwin was killed by a ray. But that still leaves us with barracudas (1/4 of their body is their teeth lined mouth), Goliath Groupers (swallowed whole), sea snakes (habitat is the Pacific, so your villain will need to bring one to the Atlantic coast), and the octopus. One that is not used too often is the Lionfish. This fish is from the Pacific, but has been transported to South Florida by eggs getting released from Paradise Island in Nassau and by local hobbyists releasing them when they are tired of their aquariums. Their sting can range from severe swelling to deadly.

The water column absorbs the colors in this order from first to last: red, orange, yellow, green, blue, indigo, then violet. You can remember it by this person’s name - Roy G. Biv. The reds start to disappear around 10 feet and are pretty much gone by 30 feet. Around 100 feet, it is almost all blue. However, there is still light, not as bright as at the surface, but you can still clearly see down below 300 feet. Think of seeing things in shadows.

Also, the deeper our hero descends, nitrogen narcosis takes hold of him. Such feeling can range from giddiness, foolishness, loss of memory, and misinterpreting what he sees. At one time this was called, “Rapture of the Deep.” It is the same effect as having several stiff drinks.

The sounds can be unbelievable, ranging from cracklings, snapping, popping, and sometimes booming. These are all noises made by fish and crustaceans. Being boomed by a Goliath Grouper will vibrate your whole body. And there are whale songs often in the distance. Plus, the air that is being breathed from a scuba tank is loud along with the exhaust bubbles.

Thus, with these thoughts in mind, you could write something along these lines:


“Hero slipped beneath the calm surface and descended downward to the coral reef. Orange and yellow tube sponges were scattered across the reef. The cracklings of snappers and grunts filled his ears. He passed over large mounds of brain coral that looked exactly like their name sakes. He swam over to the ledge and did a free fall. He left behind the reds and yellows of the reef and entered a realm of blues and violets. The only sound he heard was his exhaust bubbles rushing to the surface.

His depth gauge read 190 feet. Almost to the point where air turns toxic, 212 feet. He knelt on a sandy bottom, trying to remember why he made this dive. Nitrogen narcosis fogged his mind. A lone bull shark circled him, the brute’s body as solid as a locomotive.”

I hope this is helpful. If anyone has questions, I would be happy to try and answer them.

Again, thank you Janice for today’s opportunity. If you find blog is helpful, future articles can be written or you can just email me.

About Murder on Devil Ray Reef

While diving on Jesse Stoker’s boat, Cassandra, a local radio personality awaiting contract with extraterrestrials, disappears. Stoker considers her a hoaxster, but allowed the charter because the bank is ready to repossess his vessel.

Cassandra’s body is found three days later, but the M.E. finds she’s only been dead for five hours. Once it’s known that Stoker filled her tanks and she died from oxygen poisoning, he becomes the prime suspect. He’s never lost a diver before, doesn’t believe in alien abduction, and doesn’t believe she just died. To clear his name, stop a wrongful death suit, and save his livelihood, Stoker must figure out where Cassandra spent the missing days and find her killer.