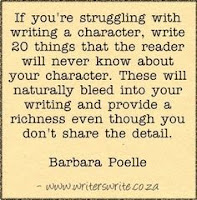 This meme floated over my Facebook feed the other day, and struck me for how true it was. So much of what’s incidental about people is revealed through their over-arching actions and dialogue—and vice-versa. I have written before on how knowing the minutiae of a character can lend to richer development of that person and their interactions within our stories, but I am also a firm believer that when we are stuck with where to go next in plot, we’re wise to go back to assessing the person our story is about, see what we’ve missed about their personality—because those pieces could well provide the direction we next need to go. After all, values, preferences, habits and quirks have far more influence than we think—even if they are not always visible to the naked eye.

Now, there are myriad ways to go about collecting the obscure data we are looking for in our characters; social media alone has umpteen surveys that fly amid our friend lists every day. Or, if you’re looking to really mine deep for (subconscious) gold, try a technique that Cricket Freeman, literary agent with The August Agency, shared at Surrey International Writer’s Convention years ago:

1. Go to bed, but leave your laptop cued up to a blank doc on the screen

2. Set your alarm for between 3 and 4 in the morning

3. Get up when the alarm buzzes and go to that blank doc, start to write every question and answer you can think of for your character. Irrelevant to profound, ask everything.

5. Read it through the next day after you’ve slept some more and be amazed at what you came up with in your half-wakened, groggy state.

Or, if you are protective over your sleep (and the older I get the more junkyard dog-esque I become), how about you try some of the following, which I’ve split into categories with plenty of room to add more to? (Oh, and remember to ask your character “Why?” after every answer he or she provides for additional illumination)


The Ordinary Every Day


Have good questions to add to the categories? Have additional categories that were not represented? Please share them in comments—and, for fun, share any answers your characters gave you to any of the above which surprised or disturbed you!