Do Sensitivity Readers Hurt or Help Our Novels? 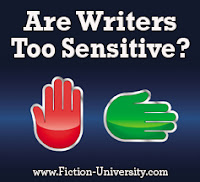 This month’s column is more a discussion invitation than a tutorial. ‘Sensitivity Readers’—I confess I am on two sides of the column on this issue.

Now, at their base purpose, ‘sensitivity readers’ are critical partners in the novel crafting process. For example (and in an effort to keep races, sexual orientations, religions or genders out of the equation) let’s pretend you are writing a story about a social worker. It would be in your best interest to have your story vetted by a few bona-fide social workers because let me tell you—as a social worker myself I find that characters crafted in the vein of my profession almost inevitably fall into one of two (grossly aggravating) stereotypes: they are either baby-snatching lunatics who rip well-loved children from the arms of doting parents OR they are brain-dead dupes who can be hoodwinked by teens with one single, well-spun lie.

Reading characters like these has given me a wide breadth of empathy for ethnic or religious minorities or those in the LGBTQ population. For if it is irritating to me to see my profession watered into weak (and false) stereotypes, imagine what it must be like for folks who are feeling marginalized due to the skin they’re in. It is unacceptable, and not only does it propagate misconceptions, it frankly makes for weak and cardboard storytelling. Ergo, a ‘sensitivity reader’ is crucial here—for not only can they keep the writing honest, they can offer the nuances, the minutiae, and the authenticity to make diverse characters rich, deep, and credible.

But on the other hand…

How far is too far in the sensitivity process? When does a corrective effort become a sanitizing endeavor? One of the articles I reviewed in preparation for this piece suggested that sensitivity readers also be used to cull scenes from manuscripts that may ‘trigger’ people.

Say whhaaaaatt? If that is the case, say a potential goodbye to novels that fall into step with masterpieces like The Prince of Tides, (Rita Hayworth and) The Shawshank Redemption, or A Time To Kill. Heck, say goodbye to my own novel, Divinity &The Python due to the graphic and brutal rape scene therein. Say goodbye also to building awareness if or when the vulgar, violent, shameful incidents in stories are erased in the effort of “protecting someone” from them.

Lionel Shriver, author of arresting fiction such as We Need To Talk About Kevin, is aware that she is often described as someone “not known for her sensitivity”. She wrote a controversial piece on sensitivity readers within which she quite derisively—but maybe rightly—says that “being offended has become a national pastime.” She’s opposed to the idea of sensitivity readers because she feels they are the first stop on the slippery slope toward censorship—and she fears that they will stifle artists’ creativity. Is she right? I read some of her points and I can see their validity.

So…where to land on this issue? I am of the mind that, where there is unintended racism, misogyny, or any other passage that may be unintentionally damaging–and that does not serve the plot in some way—clearly this is a place where prose needs to be flagged and, at the very least, a conversation needs to ensue as to its integrity. But what about flagging other material, so-called “triggering” material? Here’s where my twitch starts twitchin’. What constitutes “triggering”?

As a counselor, I can assure you that this is not a ‘one-size-fits-all’ policy; what triggers some won’t trigger others—so even a team of ‘sensitivity readers’ might not get it right. And not only that, but when does the onus fall upon the reader to either put the book down, write a scathing review, or not buy it at all if it contains an offensive scene or material that might throw them into the deep end of the emotional ocean? Further, without the (so-called) ’rough stuff, how can we expect people to develop empathy, awareness, or even have a sense of kinship in knowing that they are not alone in their experiences? It seems, in this regard, that sensitivity readers culling for triggering material may, in fact, create the opposite effect of what they are aiming for.

As I wrap this up I admit I do not have any ready answers. All I do know is that we, as fiction writers, are crafting stories in what may well be the most emotionally enlightened time in history. Never before has there been such a push for a more inclusive, broad-strokes awareness of emotional and psychological well-being of consumers. Thoughts and comments most welcome.