Music as The Writer's Muse 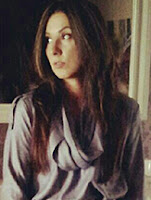 JH: Holding onto your muse is never easy, especially when the days get busy and our lives get hectic. Patricia Caliskan visits the lecture hall today with a great tip for staying focused and getting our muses dancing again.

Patricia Caliskan began her writing career as an entertainment journalist, before joining Trinity Mirror Newsgroup as a magazine editor. Patricia now works as a creative consultant for Bauer Media, based at Radio City 96.7. She likes a nice, flouncy scarf, a good pair of boots, and laughter. Lots of laughter. Otherwise life feels far too grown-up for her liking. Awful by Comparison is her first novel.

Take it away Patricia...

That lovely, literary sprite who flutters helpfully around our shoulders, filling our eager, little minds with wonderful ideas and standalone characters, which appear out of the blue, in glorious, black ink!

Except, it doesn’t quite work that way, does it?

And, believe me, if it did, there would be a lot more people writing a lot more books; happily typing away while their muse cracks on with the hard stuff.

In between hectic working lives, running a home, catching up with Sky Atlantic’s latest drama–you know, all that regurgitative day-to-day necessity which means we’re not actually getting down to writing–as soon as we do take a seat in front of a blank page, unfortunately it’s not up to that tiny, creative sprite to carry us off into the realm of our fictional worlds.

So, we take a seat, and wait for, well, something to happen. But it’s not happening.

The ticking of the clock becomes a little louder. That endless list of things we need to do, grows a little longer. And the last thing we know how to do, is jump back into the headspace which means we’re clocking up a word count, instead of procrastinating over the color of our leading man’s socks.

And that’s why God created headphones.

Now, I’m not suggesting you do this with every, single scene. And definitely not as you reach the editing stage, but heading home after a day at the office, straight back into the middle of a sizzling hot sex scene (Yippee!), a huge family argument (Hmm), or the ending to an intricate plot twist (Ouch), became so much easier once I got into the habit of setting the scene to a soundtrack.

It’s a technique filmmakers use all the time to amplify effect, and a way in which writers can almost instantly switch concentration back to the terrain of their narratives.

I first discovered my musical muse when I was working on my debut novel, which focused on two very different protagonists. Switching between those two women became so much easier once I learnt to switch between playlists.

Writing about Jennifer, the far more grounded, and much more comedic sister, alongside the darker and deceptively glamorous, Lara, was all about Roxy Music, Bowie, with the occasional sprinkling of The Charlatans, and lashings of Duran Duran for good measure, which was absolutely fine by me.

Those tracks flew me across the Atlantic. They took me home for Christmas. Got Jennifer through a break-up, and helped Lara back into her high heels. They also gave me great imagery. Imagery which infused certain scenes with dialogue and incidental anecdotes I’d barely even thought about until they danced across my mind in technicolor sound.

Back at the laptop, wiring myself up to those old albums swept me through weekends, evenings, and up into those ridiculously early hours, when I appreciated a bit of company that wasn’t caffeinated.

Just as music holds our hands and pins itself to moments throughout our own lives, she makes a most devoted creative muse. She allows us the luxury of taking a break from our immediate surroundings. She can instantly transport us back into another era. Introduce our brainboxes to the inner workings of a new character. Shift speed when the writing needs to hit it up a notch, or dim the lights for something a little more poignant.

What’s coming from the radio in that new scene you finished? If your leading man’s mood was a song, whose track is he singing along to? What’s playing out from the car stereo as your leading lady begins her journey? What’s your character’s theme tune? And the biggie: What does your story sound like? That’s a question that can make your mind spin with invaluable information you never knew about your characters.

These are the kinds of questions which create far more vivid, fictional landscapes. Of course, that’s not to say you need to share these details with your reader, but the knowing will eventually become part of the writing.

Striking the right rhythm makes sense as you’re shifting through emotional gears. And as you chart each stage of your novel, it can carry your characters’ thoughts, words and actions, right where you need them to be; sounding across the white noise of an empty page.

Tuning out from your surroundings, you instantly occupy a blank space to think. It re energizes your imagination, heightens the senses, and focuses your attention back to the machinations of your literary landscape. Similarly, in those early, and sometimes, not so early stages, when you’re attempting to iron out initial thoughts, vandalizing yet another notebook with scrawl which increasingly resembles mind graffiti, music introduces a welcome distraction. It can get you raring to go when the last thing you’re feeling is inspired.

There’s a tremendous amount of discussion on the actual act of writing, but it’s those initial thoughts; those sparky, unshakeable ideas, that get us honing our plotlines onto a page in the first place. Create the right kind of atmosphere, find the right rhythm, and those ideas will ignite quicker than you can fire that mysterious, and sadly, non-existent muse, you’ve been waiting for your whole life.

About Awful by Comparison

Jennifer Taylor is home for the holidays, but she’s in no mood to celebrate. It’s a month before Christmas, and she has been made redundant from her job as a bookseller. And to make matters worse, she’s lost her apartment and broken up with her boyfriend.

With no income and no savings, her only option is to move home with her parents.

Things could be better, but Jennifer is used to living in the shadows. That’s what happens when your sister is the beautiful New York-based model, Lara Taylor. As fate would have it, Lara is also home for Christmas with the whirlwind news that she is getting married. But it turns out that Lara’s life isn’t as perfect as it seems.

At 32 she is washed up – her agent won’t return her calls, her second ex-husband bankrupted her, and now she’s marrying Silvano who is nothing more than a good friend. And it turns out Silvano is keeping a pretty big secret of his own.

After a huge family argument, Jennifer is the only member of the Taylor clan to travel to New York for the nuptials. But just when all hope is gone, the fairy-tale magic of Manhattan weaves its spell.

Perhaps it’s not too late for Jennifer’s happily ever after after all?

Set against the magical backdrop of New York–the city of dreams–Awful by Comparison is a charming romance novel that will have you laughing and crying in equal measures.