On Balance vs. Burn-Out 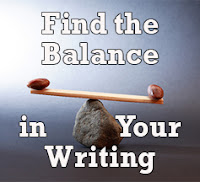 I was vending my novel at a Word On The Street festival this past weekend, and had the great fortune to share my table with marvelous children’s author Amelia Lionheart. Amelia does a whopping 96 signings/year, attends schools for lectures, works at her day job, and (of course) continues to craft fiction for her young audience. As a writer I was humbled by her hectic calendar, yet as a counselor our conversation made me think about balance—what we take on versus what we are capable of, and how we weave that trite concept ‘self-care’ into the intensity of all we do and commit to. So, if you are a writer who has ever
then maybe you could use a little balance. The reality is, the body will say “No” when we push ourselves beyond capacity, and there are twenty-four hours in a day for a reason. So let’s deviate a little this month from talking craft, and instead talk balance and how to get it—or at least approach it. Some suggestions for your reflection:


Sleep should never be treated as an option, yet some of us still operate as though it is. You know your body. You are aware if you’re an “I need 9 hours” gal or “I can function with 6” kinda guy. Be religious about your bedtime. Deviate rarely. Set rituals like a cup of tea, a yoga pose, lavender scent, whatever it takes to give your brain and body the signal that it’s time to settle down and rest. There is a reason why cops can issue Impaired Driving tickets to people who haven’t had a drop to drink but are instead nodding off. We aren’t functioning properly when we’re tired, and being fatigued leads not just to a lack of productivity, but ultimately to being sick. So…don’t be cheap with the sleep.


Want to feel more dialed-in instantly? Take a look around your environment. Is it chaos? When we live in chaos, we tend to feel chaotic, so things like a stack of dishes in the sink, a basket full of stinky laundry, papers and toys and coats and…can add to the overwhelming to-do list in our heads and contribute to that feeling of always being behind. So…set an egg timer for an hour. 45 minutes if you’re really stingy. Grab an empty laundry basket and speed-walk through your palace, tidy it up. It will look better when you do and you’ll feel like a) You’ve accomplished something and b) That the place is a little more peaceful and thus conducive to settling down and getting to work.


So many reasons why exercise is critical for self-care, especially for those of us who, by virtue of what we do, are sedentary for huge chunks of the day. Exercise, like sleep, is something to treat as a non-negotiable. One hour/day, according to data, is the magic ratio for the most beneficial amount of fitness we should be striving for and, while I won’t regale anyone with all the reasons why exercise is important (everyone has had that preached to them to *death*), I will say two things: a) exercise releases endorphins that light up the ‘reward pathway’ in the brain, thus giving you a natural high, and b) exercise will wear your body out in a way that makes item #1, Sleep, easier to achieve—thus creating a cycle of (ta-da!) BALANCE.


A handful of potato chips as you beat a path to your computer, or a fist full of chocolate after you get another rejection do not make for good nutrition. Just like your body is a machine made to move, that same machine also needs fuel. Eat properly and, when you do, do not gobble something as you peck away at your latest project. Take your meals at the table. Set out placemats and cutlery and water goblets. In other words…slow down. Food is fuel, but it is also an opportunity to settle and savor. Relax, don’t race, and also:

Hydration is the most under-utilized medication out there. When we’re dehydrated, symptoms like headaches, fatigue, and malaise are amplified. So, how much is enough? Well, data say 3 liters/day, and yep, I know that sounds like an ocean, and I can guarantee you’ll be racing to the loo a lot as you first get into the habit, but I have been putting it into practice for about three years now, and the whole machine works so much better (no more headaches! Hurrah!) Oh, and the plumbing system truly does adjust to the amount of water it receives (trust me).


That reward pathway I referenced earlier exists for a reason. We are meant to have fun and experience enjoyment, but when we’re burning the candle at both ends and have even carved out some wax in the middle and lit the wick there too, fun can seem like an extraneous luxury we are loathe to afford.

Don’t do that to yourself.

Once a week (although daily would be optimal), schedule to do something you truly enjoy—doesn’t matter what. (Although it should NOT be writing even if writing is fun ’cause it’s still your job, and the point is to blend in a break from work, not create more of it. On that note, ‘fun’ likely shouldn’t be reading, either, because if you are like most writers, you read for pleasure and as an analyst of the prose—which, again, is your ‘work’.)


Or prayer, or yoga, or any combination thereof. In silence. For however long you need it, at whatever time of day makes it most meaningful to you. Unwind your shoulders. Let your body go limp. Let go and talk to your Higher Power.


This ties back to eliminating chaos. When there is a lot to accomplish, it helps to get organized by employing a list. But lists are even more effective than being mere memory joggers. Neuroscience tells us that whenever we cross something off our to-do lists, that same reward pathway I have been talking about lights up—and we get a ‘happy jolt’. Therefore we feel better, and energized, from even the smallest accomplishment.

8. Have a Scheduled Day Off


This is hard to do this when you have a creative brain. The Muse doesn’t exactly schedule her visits. And yet…we all need a break no matter how hard we want to work, or how hard we think we should be working. (Aha!) Again, this one needs to be practiced till it becomes a habit, and at first you might even feel guilty about ‘slacking off’. The trick is to keep doing it till we feel guilty for not taking that sanctified day off. Heck, even a robot gets unplugged from time to time. You should too.

And with that I ask YOU: What have I missed? What other strategies can you share to achieve balance / avoid burn-out?