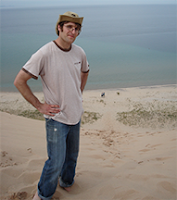 JH: I love hearing about other writers' processes, especially when they mix the plotter and pantser sides. Nick Wisseman visits the lecture hall today to share how he does it, with a fun and quick process I think many folks will want to try. Join me in wishing him a big welcome.

Nick lives in Bear Lake, Michigan with his wife, daughter, forty cats, and twenty horses. (Okay, so there are actually ten times less pets than that, but most days it feels like more.) He's not quite sure why he loves writing twisted fiction, but there's no stopping the weirdness once he's in front of a computer. You can check out his latest oddities on his website.

Take it away Nick...

Some authors plot their novels before they write them. It’s clearly a nefarious practice, so we call them “plotters.” Other authors navigate their first drafts by the seats of their pants. The risk of pulling down said pants while using them to steer is high, so we call these writers “pantsers.”

Except… most authors are actually a bit of both, right? I know I am. I outline my stories ahead of time. Sometimes extensively; sometimes in only a few bullet points. I rarely treat that outline as a blueprint, however. Instead, I consider my initial plan to be just an early draft: a version 0.5. Detours are expected and welcome—yay exploring!—and usually begin on the first page of the actual manuscript. Sometimes in the first line.

But to keep my pantsing headed in the right direction, I re-plan each scene before I write it. My (completely arbitrary) acronym for this in-the-flow planning is PCCT, short for Plot, Character, Conflict, and Theme.


For plot, I write a sentence or two about what needs to happen in the scene to move the story along. Something like “Neva finds a clue to the killer’s identity,” or “Quill proposes dynamiting the Ferris Wheel,” or “The web-toed monkeys of legend trigger the ancient prophecy by joyriding in shopping carts.”

I don’t just list events, however. This is all about why the scene will matter for the story, and why the story won’t work without the scene.

I also might scribble notes about motivation. “Derek wants to tell his sister the truth but can’t,” or “Xihuitl’s sole aim is to drop a fish on Quecxl’s head.”

The point here is to the keep the characters true to themselves while moving at least one of them further along their arc, even if just by an inch or two—in essence, I’m thinking about why the scene will matter to the characters.


Now for the good stuff: why will the fur fly? What’s the conflict in this scene going to be? “Amadi finally fights the burned man,” or “Tay stops biting her tongue and lets Naysin have it.” Or, if it’s to be something lower-key, what’s the underlying tension? “Gabe is ill-equipped for the task at hand; should have brought more than three sporks.”

Ultimately, this comes down to why the scene will be interesting.


Finally, I try to write a few words about how the scene relates to the novel’s theme. This rarely involves having a character state it; usually, the thematic element will be about mood, or setting, or the way an action unfolds. “In the White City of the Fair, the sunset reflects off the Court of Honor; in the Black City of Chicago, homeless line the streets.”

This doesn’t have to stand alone; taken out of context, the scene might not have a clear message. But themes are portrayed a piece at a time, and revisiting my larger motif helps me keep sight of why the story as a whole matters.


I usually do my PCCT (hmm… now it sounds illicit) in a separate document. The result is a second, more-current outline I can refer to after I finish the first draft and start gearing up for revisions.

Of course, a scene-by-scene consideration of plot, character, conflict, and theme is something I could tackle in my first outline. (And sometimes I do.) But regularly refreshing these components helps me adjust for the ripple effects I caused by deviating from the plan in earlier scenes.

Basically, it’s a belt to keep my pants(ing) from falling down and tripping me.

Because belts are important, people. You should wear one.

About The Red Wraith

As magic awakens in Early America, Naysin, a child of the Lepane nation, manifests talents that defile his tribe’s harvest ceremony. His punishment is exile. In the years that follow, Naysin’s spirit fathers keep goading him into misusing his abilities. On the island of Bimshire, he inspires a slave rebellion before abandoning it; near his former home, he marches European settlers to their deaths; and in the forests of Edgeland, he ends a battle by massacring both sides. Such acts cause much of the New World to see him as the Red Wraith, an indigenous monster who delights in butchering white innocents. The infamy is well-earned, but that’s not who he wants to be. And when he encounters a group of fellow magic-users, Naysin realizes how he can set everything right…