How to Write (and Not to Write) an Author Bio 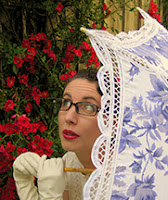 I still have readers who tell me they purchased my first book because they liked the bio. Sure, the cover got them to pick it up, and the description got them intrigued, but they bought it because of the bio. I think this is uncommon. I took a risk with my bio and it worked.

But first, here's what most authors do...


[Name] lives in [City] where she pretends to be a [pithy comment on boring day job] when she would rather be writing. She spends her free time [standard hobby] and [less standard hobby]. She also likes to [quirky and slightly off base skill – like fencing or black belt in some combat thingy ]. She lives with a [tolerant, saintly, long-suffering] spouse/partner and two [witty descriptor] [cats/children] and a [dog/garden].

So, that's your formula.

Why would readers pick up a book written by someone who doesn't have the imagination to come up with a unique bio?

My recommendation? Break from tradition.

Look at the bios of authors you admire (Lemony Snicket's is wonderful), particularly those who also have large social media followings. If you write dark fiction, give your bio a mood swing into noir. If you write under a pen name, give that pen name your life... only tweaked. Mystery or suspense? Make that bio mysterious and suspenseful. You don't have to lie, but you can certainly exaggerate. Everything in my bio is true, just shifted slightly into the absurd.


Gail Carriger writes to cope with being raised in obscurity by an expatriate Brit and an incurable curmudgeon. She escaped small town life for Europe and inadvertently acquired an education. She now resides in the Colonies with a harem of Armenian lovers and tea imported from London.

This book took place in England, so I wanted to establish both credentials and a connection to the UK (I mention a British parent, importing tea, and travel). My books are funny and sexy so I wanted that tone to come across (the harem & descriptive word choice). My hero is a big gruff werewolf (hence "curmudgeon") and the setting is historical (hence use of the word "Colonies"). I write with complex vocabulary, so I make certain this is also represented in my bio.

I had three sentences to work with for my bio. Three. At least two things in each sentence tie to my world, my style as a writer, and/or my general whimsy. Someone who doesn't respond well to this bio, probably won't like my books.

I'm not holding this up as an ideal. I'm merely stressing the fact that your bio is on your book. It is on your website (and lots of other places, I hope). People read it as an insight, not into you as a person, but into you as an author. Notice I don't mention my hometown (not relevant), nor do I name hobbies (who cares, really).

Look, let's be honest here: Your bio is a marketing tool. It's brand management. Don't cop out with a pat formula. You're a writer? Write this as well and with as much attention as you would the book itself, if not more.

Gail Carriger writes steampunk comedies of manners mixed with urban fantasy. Her books include the Parasol Protectorate and Custard Protocol series for adults, and the Finishing School series for young adults. She is published in 18 different languages and has 13 NYT bestsellers via 7 different lists (including #1 in Manga). She was once an archaeologist and is overly fond of shoes, octopuses, and tea.

Her latest book is Imprudence, the second in her Custard Protocol series.

(And... her bio is now much altered because that's what happens as a writing career progresses. Marketing. It's all about marketing.)

Rue and the crew of the Spotted Custard return from India with revelations that shake the foundations of England's scientific community. Queen Victoria is not amused, the vampires are tetchy, and something is wrong with the local werewolf pack. To top it all off, Rue's best friend Primrose keeps getting engaged to the most unacceptable military types.

Rue has family problems as well. Her vampire father is angry, her werewolf father is crazy, and her obstreperous mother is both. Worst of all, Rue's beginning to suspect what they really are... is frightened.