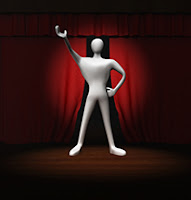 So last night Atlanta had its first Noir At The Bar which is an event that occurs around the world in several major cities. It's focused on crime fiction and occurs in a bar, but otherwise each city's N@TB is different from the next one. Basic set up is you have 8-20 writers who join up and do a 5-15 minute reading. It's a total blast and you should look and see if there is one that happens within driving distance to you. If so, go and enjoy. (Links will be below to read more about Noir At The Bar)

But now the point of this article.

Once you publish something you probably will receive an invitation to read in public. Maybe it will be your book release, maybe you will be at an event such as Noir At The Bar, and maybe it will be a reading at a convention. Here are some tips to prepare for it.

Tip 1: Realize That the People There Are There to See You


This one is hard to remember if you are on a bill with better known authors. Sometimes we get in our own heads and we try to convince ourselves that we aren't important, that what we have written isn't interesting and who would want to hear us read it anyways? Well, buck up buttercup, if you are in a room and on a bill to read and anyone is in that audience they are there for YOU. Yes, they may not have ever heard your name before but they are there to hear a reading and when it's your time, well it's YOUR time. Own it. You are the rock star of that concert.

Tip 2: You Are Not Selling Your Book


You may be selling it afterwards, and your reading might be the enticement for someone to buy your book, but in that moment on stage you aren't selling anything. Take that concern out of your mind. You don't have to be anything but a way for the words of your story to be spoken into the air. That's it. Nothing more. You wrote something and those people are there to hear it and that is the end of that deal.


Readings work best when kept short. Whether you are reading a piece of short fiction or a portion of your novel, you should keep it at about 10 minutes max. Yes you can run a little over and of course you can come in under but 10 minutes is the sweet spot.


This is your story. You know its beats and its rhythms. You are probably going to tend to read fast so try to concentrate on slowing down. Believe me, it is much easier if you just take your time and work your way through at a nice even pace. It also helps your audience follow you.


Read the story through on your own a few times. Try to emphasize the parts you need to emphasize. Use different voices, work on using your hands, and try it sitting and standing. Don't feel like you have to do anything but read, however, trust me, if you feel like making a fool of yourself and using all the voices and even a series of funny hats or magic tricks, the audience will be fine with it. It's okay to enjoy yourself, throw yourself into your story and really bring it all.

Tip 6: Print Your Story Big Enough to Read it Easily


You never know what the lighting will be like so prepare by printing your material in a font that is big enough for low light. Use double-space. If you wind up in a dark bar you will appreciate it. And number the pages. NUMBER THE PAGES.


I've done a LOT of readings and I've been to a lot more. Authors of all levels and points in their careers have read their words to mine ears and you want to know what they all have in common?

Every single one of them.

Never have I done or heard a reading that someone doesn't stumble somewhere.

So quit worrying if you do it and keep reading.