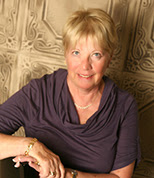 Setting wraps around our stories and gives them a place to live. They can become just as much a character as the people who live within them, so they deserve a little extra attention so they look their best. Please help me welcome Judith Keim to the lecture hall today, to share some thoughts on setting as a character in your novels.

Judith was born and raised in Elmira, New York, and now makes her home in Idaho with her husband and long-haired dachshund, Winston, and other members of her family.

Growing up, books were always present--being read, ready to go back to the library or about to be discovered. Information from the books was shared in general conversation, giving all of us in the family a wealth of knowledge and a lot of imagination. Perhaps that is why she was drawn to the idea of writing stories early on. She particularly loved to write novels about women who face unexpected challenges with strength and find love along the way.

As J.S. Keim she writes children's middle-grade stories. She loves writing about kids who have interesting, fun, exciting experiences with creatures real and fantastical and with characters who learn to see the world in a different way.

She has a story in Chicken Soup to Inspire a Woman's Soul and a story in Belle Book's Mossy Creek Series - A Summer in Mossy Creek. Some of her stories have finalled in RWA contests and three of her children's stories have been published in magazines - Highlights for Children, Jack and Jill and Children's Playmate.

Take it away Judith...

A story is held together by many things–plot, characters, motivation, action, tension, growth, resolution of conflict, etc. But the sometimes unrecognized glue to a good story is its setting. A vibrant setting gives a reader much more than a sense of location, it becomes a living addition to the story with the interweaving of these five senses–sight, touch, taste, smell and hearing.

And depending on what kind of book it is, the setting can be crafted to include the emotions, mood, and tensions of the story.

Various regions of our country have things that are specific to them. For instance, stories set in the south tend to have lyrical descriptions that roll slowly across the page like words from a southern tongue.Unseen foreign places or those you create can become real to readers with a strong sense of setting.

With just a few words, using mere fragments of lovely descriptions, a reader can get a wonderful sense of setting and understand the kind of story it is. When writing your own novels, I suggest making a list of words you associate with the settings in your story–both visual and emotional. Then weave those words into your descriptions of what your characters are seeing and feeling! It’ll add a dimension to your story that readers love.

Brief descriptions from some of my books follow, making it easy to see how just a few extra words can make a difference in adding to setting:

The Talking Tree (The Hartwell Women Trilogy-1) - Light shone through the sparkling glass like a lighthouse’s guiding beam to a wayward ship. Inside, I knew, there would be peace and contentment.

Sweet Talk (The Hartwell Women Trilogy-2) - Upon occasion, I made my way down the hillside to the center of town, where a number of stores clustered around a small marina like ducklings waiting to dive in for a swim.

Straight Talk (The Hartwell Women Trilogy-3) - I looked out the window at the Charles River. Triangular white sails on a number of small sailboats dipped and soared above the water, like gulls playing in the wind.

BabyTalk (The Hartwell Women Trilogy-4) - In front of me, the blue-gray water met the sandy shore with a moist kiss, reared back like a shy lover—and then, tempted for more, embraced the shore again. Gulls cried out, swooped down and lifted up in the air in unending musical acrobatics. A few large rocks, precursors of the rockier coastline down east, protruded from the water’s surface like sea creatures wanting a peek at the world.

Breakfast at the Beach House Hotel - Standing on the balcony off the bedroom, I gazed down at the pool below. The waterfall at one end sent glistening ripples dancing across the pool’s surface. The sound of the tumbling water was almost drowned out by the lapping of the Gulf on the broad, white beach beyond the house. Peace, such as I hadn’t known for a long time, wrapped around me.

Fat Fridays – She stood a moment, admiring her surroundings, so full of promise. Plantings of various sizes and shapes filled the landscaped spaces between the large houses and served as a playground for the birds flitting among the budding branches. The trees would soon leaf out in pale green glory. Bradford Pear trees were about to blossom, and then their white flowers would coat the branches like fallen snow. Redbud trees would soon add patches of brilliant pink, making the world seem a fairyland of spring colors.

Sassy Saturdays -The chatter of customers, the clinking sound of glasses and the growing sense of anticipation from the crowd increased Tiffany’s usual pre-performance jitters. She was lucky to have the job. The Glass Slipper was a newly-opened, upscale lounge in the town of Williston, Georgia, outside of Atlanta.

It doesn’t take much to make a setting come alive. In the Beach House Hotel books, the setting is actually a third character because Ann and Rhonda’s story mostly takes place at the seaside estate they turn into a small hotel and is present throughout the book. Have fun making your stories come alive with settings that stir the imagination!

About Breakfast at the Beach House Hotel

When Ann Rutherford’s husband dumps her for the bimbo in his office, unfairly leaving her without a home or a job, she reluctantly joins forces with Rhonda DelMonte to convert Rhonda’s Florida seaside estate into the small upscale hotel it once was. Ann, quiet and reserved, is no match for brash, bossy Rhonda, who left the family’s New Jersey butcher business after she won the lottery. Amid their struggles to succeed, The Sins of the Children, a soap opera, films a number of episodes at the hotel and things get complicated in unexpected ways when Ann falls for Vaughn Sanders, the star of the show.