How Do I Hate Thee? Let Me Count the Ways 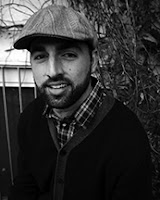 Great antagonists make great stories, but not every bad guy is the "bad guy" of a tale. Sometimes it's all a matter of perspective, and what gets in the way ultimately makes you stronger. Visiting the lecture hall today is Scott Reintgen (It's pronounced Rankin) to share some thoughts on how antagonists work with a story's conflict to produce delightful results. Today is actually his wedding anniversary, so congratulations to Scott and his wife, and best wishes to happy couple.

Scott was always a back-row dreamer. As early as kindergarten, teachers noticed his tendency to stare out of classroom windows and disappear to more interesting elsewheres. Convinced he would one day be a writer, Scott spent most of college and graduate school investing in the world of literature. This eventually led to a career teaching English and Creative Writing in North Carolina. He strongly believes that every student who steps into his classroom has the right to see themselves, vibrant and victorious and on the page. It’s his hope to encourage a future full of diverse writers. As he’s fond of reminding his students, “You have a story to tell and you’re the only one who can tell it.”

As for his own writing, Scott continues to follow in the footsteps of his favorite authors. It was Tolkien who once wrote, “The fairy gold (too often) turns to withered leaves when it is brought away. All I can ask is that you, knowing all these things, will receive my withered leaves, as a token at least that my hand once held a little of the gold.” And Scott hopes his books are a trail of withered leaves that might lead readers to the bright elsewheres through which he constantly finds himself wandering.

He currently lives in North Carolina with his wife, Katie, and family. His novel The Black Hole of Broken Things comes out in 2017 by Crown Children's.

Take it away Scott...

One of the most universal truths in life? Things are against you.

So if conflict is expected and important, how we write our antagonists becomes central to writing a good story with a good protagonist. I use a pretty simple method for keeping up with my antagonists. It’s the same one I teach to my students. It’s called the threefold method. 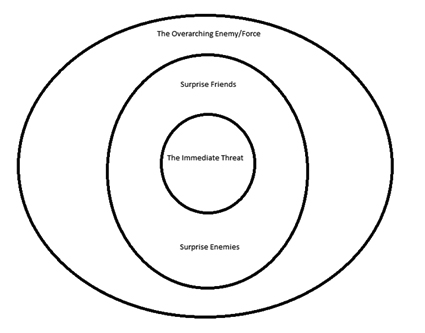 For conflict to be central in a book, it has to come from somewhere. As authors, it’s our job to consider the best way for keeping our characters on their toes, and our audience in their seats. I try to find as many ways as possible to work the above layers of antagonism into the plot. Let’s discuss the role each one can play in well-rounded story:


Here’s looking at you, Draco Malfoy. Most stories have a revolving cast of immediate threats that test the protagonist. They’re the annoying characters that turn into bitter rivals. They always seem to arrive on the scene at the perfect moment, whether to get in the last laugh or to take advantage of our hero when they’re most vulnerable. The immediate threat is the person in the scene with whom our protagonist feels tension, or more simply, the person keeping them from getting what they want. Malfoy, Ambrose Jackis (The Name of the Wind), and Titus (Red Rising) are all examples of this.

But a good author doesn’t simply use these characters to bully or steal or harass; they also use them to reveal the best and worst of a protagonist. Consider Harry’s reaction in the first book of the series when Malfoy explains there are certain wizards he should and shouldn’t be hanging out with. A defining scene that shows the reader that Harry will choose friends over popularity, loyalty over bogus standards. Later, however, Malfoy brings out the worst in Harry. Whether it’s the use of dark spells or obsessive stalking, Harry’s willingness to occasionally slink down to Malfoy’s level keeps him meaningfully human in our eyes.

While these threats don’t typically evolve into overarching threats, they can grow in power or increase in danger to the character. This is true of Malfoy, but it’s also very true of Ambrose in Patrick Rothfuss’s The Name of the Wind. What starts as petty back and forth quickly evolves into life threatening situations. This growth depends on the type of power and agency you’re willing to give your immediate threats, and how their relationship to the protagonist develops.


Severus Snape sound familiar? Or maybe your prefer Alma Coin? Other models refer to these characters as shapeshifters. They’re my favorite toys in most stories. Convince us that a character is good, then make them do the worst imaginable things. Convince us that a character is rotten to their core, then give them a touching scene caring for a bed-ridden sister. Each surprise friend or enemy is an opportunity for the author to shock us and the protagonist simultaneously. This deepens our connection with the main character, as we further identify with how they feel about these other characters.

I'll use William Forrester from the movie Finding Forrester as a less obvious example. At the start of the movie, he’s the immediate threat. First, he threatens Jamal's life, and later he threatens Jamal’s integrity as a young black man. However, this clearly antagonistic character eventually evolves into the mentor through Jamal's heroic journey. We like seeing a person grow from blatant enemy to hopeful friend. We also like seeing our protagonist create these changes in others. That’s one more way to give them agency in the plot.


A common, but fun concept. An overarching enemy is the threat that looms behind or beyond all other threats. They are often vague, an idea, a presence felt throughout some broken empire. In the Eragon series by Christopher Paolini, we don’t even meet Galbatorix until the fourth book. However, there are hundreds of scenes in which Eragon thinks about facing that eventual danger. Voldemort is similar. His methods of attacking Harry are fairly roundabout for the first handful of books. We know that a great evil exists behind each threat, but the fullness of his power won’t be realized until much later in the series. Much of the same could be said of the Chandrian in regards to young Kvothe.

Once you have a sense of all three character types, it’s easy to juggle them through your scenes as needed. My personal preference is to limit the number of scenes in which I don’t have one of these antagonists present. There are necessary rhythms in a plot that might demand a break, scenes in which your protagonists have pool parties, or sleep like bricks, or eat all the cakes. But once you’ve given us that chance to breathe, why not give the plot a nice shove back into conflict?

I always like to brag on books I’m reading. So I’ve chosen a quick example to see if it fits the model of the threefold method. Let’s look at my most recent read, Perdido Street Station by China Mieville, and specifically his main character, Isaac Dan Der Grimnebulin:

Immediate Threat(s): Isaac is harassed by colleagues, by the militia, and even by a council of robots. Often, however, the immediate threat revolves around hiding a scandalous relationship that might ruin his reputation in the community.

Surprise Friends/Enemies: We have a betraying colleague that fits nicely, but my favorite surprise friend is The Weaver. A frightening force beyond the protagonist’s control takes an interest in his life, thinking Isaac the best option for improving the world’s spinning webs and timelines. Not only is the Weaver a surprise ally, but it acts as an unpredictable power beyond the comprehension and control of the protagonist, which makes him as frightening to Isaac as he is helpful.

Overarching Threat: The slake-moths. Forget government interrogations and drug dealing cartels, these are the real bad guys. Escaped monsters of a failed experiment, the slake-moths begin to feed upon the city of New Crobuzon. Lacking any natural predator, they threaten to destroy the city if their power continues unchecked. Other threats must be dealt with in the story, but all roads lead to the necessary destruction of the slake-moth brood, else the city will fall.

So the model fits that story nicely, but is this the only way to write your antagonists? Of course not! I just use the threefold method to keep my conflicts straight. Oftentimes, I’ll read through a scene and note which threats surfaced. Did my character reflect on the overarching threat while they took a shower? Did they have to deal with the annoying guy at the supermarket again? Was this the scene they found out their dad is actually a gambling drunk? Tracking these movements allows me to create a plot that never lacks in tension, conflict, and intrigue. Hopefully you’ll find the method as helpful as I have as you continue working on your own stories!

Emmett Atwater isn’t just leaving Detroit; he’s leaving Earth. Why Babel recruited him is a mystery, but the number of zeroes on their contract has him boarding their lightship and hoping to return to Earth with enough money to take care of his family, forever. As he and nine other teenagers wormhole their way through space, Emmett discovers the promised millions aren’t a guarantee. Each recruit must earn the right to travel down to Eden. There, Babel will use them to mine a substance that’s quietly become the most valuable in the world. Emmett’s year-long flight will act as a competition. Every training session is measured, every point matters, and Emmett will do anything to win. But Babel’s ship is full of secrets. Secrets about the volatile substance they’re hoping to mine, about the reclusive humanoids already living on Eden, and about their true intentions for the kids that don’t win their competition. As Emmett uncovers the truth, he realizes he’s not fighting for wealth or glory, he’s fighting for his life.
Share