Picking a Piece Apart & Plucking The Gems: Thoughts On The Killing—The Techniques That Make It Sensational (And How To Steal Them, Of Course!) 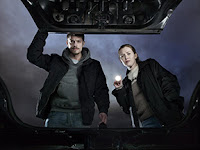 I think all of us writers read books and watch films with a critical yet deeply appreciative eye. What makes some of the blockbusters work so well? What sorts of techniques have the writers utilized that have deepened the atmosphere, given it a bigger feel, or underscored the theme in ways that live with us long after the credits roll?

I am a passionate fan of the Netflix sensation The Killing, and every episode blows me away by how exceptionally it is executed. From this series, I have plucked the following techniques which I believe contribute to its powerful construction. Each one of these methods can, happily, be replicated in our own writing. Here goes (with a good ol’ college try at avoiding spoilers):


Hear that a teen is named ‘Rosie’ and one immediately thinks of glowing cheeks and beauty and optimism—‘Everything is coming up roses’. Then there’s Seward. As we watch his arc unfold we saw that he was, certainly, ‘sewered’. ‘Skinner’—Skinner is a long-held slang term for a kiddie diddler or killer in the prison system. No surprise that this character appears in Season 3, which focuses on the serial murders of dozens of female street youth. Then there’s Holder himself, the emotional nerve-center of the show, Stephen Holder is, quite literally, the ‘holder’ of the hope, the compassion, the optimism, and occasionally he is also the holder of Linden when she falls apart.

Exercise: Do the names you’ve chose for your piece of fiction have implicit meanings? Should they?


I won’t expound too much on this, as I have written an entire article on incorporating seasons and weather already, but I will say that The Killing is an excellent example of how this technique works; every episode either starts, ends, or stays in a downpour, and what is rain? Rain is a reminder that we are in a bleak, dismal place both literally and figuratively in The Killing. Rain is a symbol of tears, and embodiment of sorrow. It is also, in a broader sense, a symbol of the deluge of clues, red herrings, and dysfunction that muddy the waters of Linden and Holder’s investigations.

Exercise: Try a scene where inclement weather can represent the mood beneath the occurring action.


In Season 3 the theme is all about being wrong. Linden is perpetually wrong. Wrong about little, incidental things. Wrong about the big, life-altering things. Her judgments are wrong, her timing is wrong, her love life is wrong and her conclusions are wrong. She is wrong and that’s her emotional arc in this season—and while in a normal piece of fiction this may turn the writer off (‘Can’t she ever be right?!’) we never lose pace with Linden. Why? Because the writers also make sure she is so earnest, so tenacious, so tireless, so just, and also because she works so hard. We keep rooting for Sarah Linden even though she’s wrong. Now that’s exceptional writing and phenomenal character development.

Exercise: Make your theme appear in small, incidental ways within your project. Make it also appear in large, can’t-miss-it ways in your project. Ask your crit partners to remark on it specifically to see what to keep / what to cut.

4. The Power of Flawed Characters


Linden and Holder are grit-lit cops; they couldn’t put together a pressed-perfect uniform between them if they tried. (In fact, I think Holder’s cut the sleeves off of his). These two look nothing like clichéd cops and everything like deeply troubled human beings. She’s a former foster kid who ran away from more homes than she stayed in. She is a single mom who acquiesced her son to his Dad—and now Holder talks to Jack more often than she does. She is an obsessive workaholic and a chain smoker. She’s been institutionalized as a result of a breakdown she’s never really healed from. She is a mess—and we don’t necessarily love her, we don’t even always respect her—but we’re sure as heck compelled by her. Now that’s fantastic writing.

Exercise: Consider your character’s backstory and the traumas he or she has endured. What sorts of impact have these experiences left behind? Is there addiction now? Trust issues? Inability to commit? Is it emotionally safer (like Linden) to stay at work versus home? Make your characters’ traumas serve your story.

5. The Power of Detail


Setting details are a little easier to execute on film than in writing because when viewing film, our eye is struck with these images again and again. But we writers have a couple more tools with our pen and paper that directors don’t have (we can refer to smell and taste where on film this cannot happen, for example). We can also plant powerful visual descriptions that stay consistent with the theme, geography, and population our pieces are telling, placed in, and about respectively. In The Killing’s third season, all about street youth, we’re in flop houses with bare mattresses oozing stuffing. In trailer parks and inside circa 1970's mobile homes (which also saw their last deep cleaning in the ‘70s. Yech). The characters wear dirty clothes (including Holder and Linden). There are late-night greasy spoons with vinyl booths and grubby floors. We are, in short, immersed in inner-city Seattle (or inner city anywhere) and we are rubbing shoulders with the population who live there. It’s uncomfortable and icky—just as it should be, and owing to the excellently, and accurately tricked-out set.

Exercise: Imbed the most vivid setting details possible into your piece (and you get to also use smell and taste!) in order to paint a ruthless picture of the place where your story is set.

Five observations, five exercises, and a challenge to each of you to hone in on the show (or shows) which hook you the way The Killing hooks me. Analyze what makes them work so well—then perhaps share your observations and accompanying exercises for us to all try!

Yes. You read that correctly. You just got wounded doing something few people are courageous enough to do. So like the skier who broke a leg trying the Black Diamond run, or the vocalist who got his heart ripped out by Simon Cowell after being brave enough to audition for American Idol, you now have a scar you can talk about, a scar you’ve earned through hard work, learning, discipline, perseverance, passion and love. You’re a writer—and should be damn proud of it.