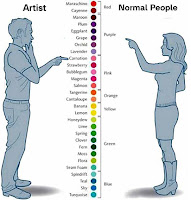 Sometimes I see a meme like this and get ridiculously excited (I tell myself it’s because I think like a writer—but really, it’s just ‘cause I’m the most pathetically easy-to-entertain date in town). This one, on the nuances in a palette, had me reflecting on how we, as authors, can employ color to create a bigger, richer feel to our stories. Such as:


Notwithstanding cultural and geographical variances, we tend to associate certain colors with certain things. Such as:


As the mind makes these subconscious associations, the power of suggestion is on the side of the writer and we’re able to plant colors to suggest subtext in our settings. For example, in my novel, Divinity & The Python, everything associated with my enchanted old morgue was some shade on the spectrum of purple, in step with the old place’s strong foothold in the mystical realm. M. Night Shyamalan did this a thousand times better than I ever will in The Sixth Sense, wherein everything associated with the plot’s varying menace and secrets was colored scarlet—a color we are accustomed to associating with alarm and emergencies.

Innate interpretation of certain colors can, therefore, be subconsciously suggestive. More directly, yet closely related to this concept is:


An office in shades of smoke and steel feels worlds different than an office in shades of plum and berries. One’s strict, one’s whimsical. One masculine, the other feminine. One’s imaginative, one’s innovative, and so on. And you can become even more specific than this when you consider the spectrum of color you’re draping within your setting. Mustard carries a different suggestion than lemon, which is also different than straw, right? And any nuance implied by any one of these shades would be diluted if the writer just used plain old ‘yellow’. Same goes for snot vs. fern vs. emerald. (Although maybe in a Fae’s world, the faeries ‘ snot is all emerald. Hehheh. Just messin’ with ya). In all seriousness, if you are stumped on shades, take a field trip to the paint department in your local hardware store and collect paint chips. The shades are often beautifully and creatively described. Or check out this great list of obscure color words, originally appearing on The Writer’s Circle page on Facebook.

In any event, consider the tenor of your setting and the mood you’re aiming for, then paint accordingly: choose the appropriate shade to reflect what you’re constructing—not just the color word.


Incongruence inflates tension. Consider your reactions to: A scarlet coffin. A bubblegum pink whip. A banana yellow pistol (I’ve seen one! The pistol. Not the whip. Thankfully). When the color doesn’t “match” the item it’s describing, it creates a disequilibrium which in turn can feel anywhere from absurd to macabre, zany to deeply disturbing: “Why do they dress their new baby in nothing but black?”

Less blatant than these examples, yet still effective, consider our berry-colored office from above. Now populate it with oil executives. Or the smoke and chrome suite we spoke of. Now it’s the nerve center of a daycare. Either setting throws you a titch off your game, makes you go “Huuuuuhh?” Why? Because incongruence always executes a message beyond the mere visual; it delivers information that is both highly revealing and also makes your reader wonder “Why?”. And if a reader is wondering why, a reader is turning your pages. Huzzah!

4. Color Can Cast a Deeper Point of View For Your Character


Males and females often describe color using vastly different language. A woman may see a sunset in shades of rose and tangerine. A man sees it as fire and brass. Conversely, a child looking at the same sky could see orange soda and streaks of cotton candy.

More minutely, who your character is can also be revealed through their interpretation of the colors in their world. Our aforementioned sunset, to an alcoholic, is the shade of a spilled mai tai. (“And what a waste!” he thinks). Or to the chronic dieter, the setting sky torments her for being the same color as the populace of carrots now dominating her fridge. (Damn things!) In short, your characters would describe color from a frame of reference familiar and unique to them*—or from the frame of reference most important to them at that time. Alongside that, it’s entirely possible to subtlety convey your character’s arc through this lens as well; the mai tai sky becomes a creamsicle ice cream (and thus a whole new kind of craving) to our alcoholic in recovery. The carrots on the horizon look more like oranges and a few sliced up strawberries to our now-optimistic dieter—and so on, you catch the drift.

Inclusion and consideration of color. Another of the myriad ways we can deepen character, setting, and atmosphere in our fiction.

*Note that here is where ethnicity has an opportunity to be conveyed or enriched in that color is subject to uniquely cultural interpretations and / or significance.