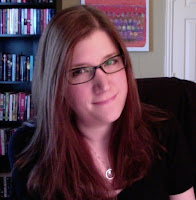 It's not unusual for writers to have a style that's unique to them. Call it voice, career theme, story topics--however it works, readers know going in what they're going to get. And if they don't? Well, you might end up with some disappointed readers. Roni Loren visits the lecture hall today to share more thoughts and tips on keeping your author's promise, and why that's so important.

Roni wrote her first romance novel at age fifteen when she discovered writing about boys was way easier than actually talking to them. Since then, her flirting skills haven’t improved, but she likes to think her storytelling ability has. She is the New York Times and USA Today Bestselling Author of The Loving on the Edge series and other sexy things.

Take it away Roni...

In writerland, you’ll hear a lot of talk of voice. Not just from other writers but from readers who say they like a writer’s voice. I say it myself about authors I enjoy because voice is a biggie for me—a deal breaker in many cases. Sometimes I connect with an author’s voice and sometimes I don’t. Rarely does that opinion change from book to book.

But over the last week I’ve been reading some of my go-to authors. And I realized that it’s so much more than voice. I know what I’m getting when I go to a trusted author. We hear the word “brand” bandied about, but I don’t think that’s exactly the right thing because that gets tied up in marketing and promotions. I think of it more as an author promise.

I know when I pick up Author A’s book that I’m going to get a really alpha hero and a lot of suspenseful action and a strong-willed heroine no matter what the plot or setting. That’s her author promise even if it’s unspoken. On the other hand, I know that Author B is going to be low on external plot conflict but high on internal and that it’s going to be a quieter, more easy-going pace with a heavy focus on the romance. Both are enjoyable to read, but I know what I’m walking into because they’ve set up that promise in previous books.

So as an author, I think it’s important to give some thought to not only your voice but what promise you make to your readers. What is your unique stamp that makes it a “you” book? For instance, no matter the subgenre I’m writing in, a Roni Loren book is going to have the following:

Angst – I can’t seem to write heroes and heroines with simple backstories. Maybe it’s the former social worker in me,but there is going to be angst and no small amount of self-loathing in my books. Which leads me to my next point…

Universal themes of healing and self-acceptance – I had a writer friend point out that these are my universal themes. (I hadn’t seen it myself, lol.) All of my books have some thread of this even though the plots and people are completely different in each book. So it’s an important thing to think through with your books. Do you have certain themes you tend to write about? If you can’t see them, it may help to ask trusted beta readers.

Deep characterization – This is the bread and butter of my writing style. I am a character-driven writer. You’ll probably never get intricate suspense plots from me, but (hopefully) you will feel and fully connect with the characters in every book. The depth of the characters is probably what is mentioned in reviews most often.

Dominant heroes who are big softies – I do not write what we dub in romance as the “alpha-hole” hero. Some writers can pull off redeeming an a**hole and that’s part of their author promise, but that’s not who I write. Even though my heroes are very alpha and often dominant, they are also the guys who are sweet and respectful to the core, guys your mom would want you with.

Screwing with Timelines – This isn’t every book, but I often mess around with timeline structure. I have two books with dual timelines. And I just recently had a novella with a frame device, book starts in present, middle is past, ending is back to present. Readers know when they pick up one of my books, it’s not always going to follow traditional structure.

So that is a Roni Loren book and the promise I make to my readers. Did I think about this as I was writing my series? Honestly, no. This is definitely a hindsight observation. And as a writer, you might not be able to see your “promise” or unique signature until you’re a few books in. You might not even have that signature until a number of books are under your belt because you’re still getting your footing and finding your style.

So why is it important to know your author promise?

1. It gives you a better of idea of who your “comps” are, meaning which other authors you’re similar to and whose readers you’d appeal to.


Nothing will get you more ire in reviews if, in the summary, there is some marketing line of “If you love BIG TIME AUTHOR, you’re going to love YOUR NAME!” and being wrong. Seriously. I’ve seen it happen. If you or your publisher is making claims like that, let them be accurate.


Want to build a fanbase? Keep your author promises. For a reader to spend money on your book, they want to know there is a high chance that they are going to enjoy it. If you’re inconsistent or jump around genre and styles too much, they can have trouble feeling confident that you’re going to deliver what they’re looking for.

3. It can help you brainstorm and craft ideas.

So knowing that promise can help in a number of ways. But having said all that, don’t let yourself get boxed in either. Writing is about exploring and pushing boundaries, so just because you usually write light and funny doesn’t mean you can’t pen a dark tale.

But know that your readers may need a little warning. And be prepared that they may love it, but they may also not be receptive to it no matter how well written because it’s not what they’ve come to expect from you. Some readers like your voice—meaning whatever you write, they’re going to be game—and others like your promise and will want what you’ve done before. It’s good to know the difference.

And hey, there’s always a second pen name if you want to get really crazy, right? ;-)

Do you know what your author promise is? Are there authors you’d follow to any genre? Ever had an author “break” a promise?

About Call On Me

Oakley Easton wants two things: to be a good mom to her daughter and to ditch her less than ideal night job. Hooking up with bad boy drummer Pike Ryland? Not on the agenda. She needs a promotion. Not sex, tattoos and rock ’n’ roll.

Pike isn’t about to let Ms. Prim and Proper shut him down so easily, especially when he stumbles upon Oakley’s sexy night job. She’s only playing a role on those late night calls with strangers, but when he gets her on the line, all bets are off. He won’t stop until that sultry voice is calling his name for real.

But as they move from anonymous fantasies in the dark to the flesh-on-hot-flesh reality of the bedroom, the risk of falling in love becomes all too high. And the safe, quiet world that Oakley’s worked so hard to create is about to be exposed to the one person who could ruin it all.