Backmatter: Are You Making the Most of Your Digital Shelf Space? 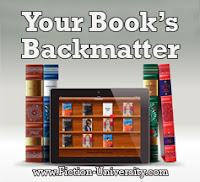 JH: Jana Oliver is taking a break this month, so let's dip into the archives for a very important aspect of self publishing many authors overlook. Their novel's backmatter.

When I first decided to start self-publishing, I thought the major sticking points for returning to a contract were royalty rates and the price points for digital books. That was pure naivety—I didn’t realize that I was doing something wrong, something fundamental, and that once I fixed it, it would change how I think of digital sales.

Before I start telling you about backmatter, I have to tell you how I think about digital sales. In the world of print, much depends on your shelving. If you’re at the front of the store, you’re going to sell more copies than if you’re stuffed on the back of the shelves. Stores decide what books to put at the front on the basis of a handful of factors: what the publisher’s willing to pay for the experience, how titles from that author have sold in the past, and other factors. In general, though, the performance of prior books by an author determines the initial placement of the next book.

Publishers have been struggling to come up with the digital equivalent of the front-of-store table. Some venues (like iBooks and Kobo) have come up with specific storefronts that point to special pages that are designed to showcase specific books, authors, series, or publishers, but that space is much, much more limited than in a real store, and not all vendors are willing to play ball.

Does this mean there’s no shelving in digital? No, of course not. Digital shelves are formed by (1) venue bestseller lists and (2) alsoboughts (the list of titles that show up under a book that are similar to the one the customer is looking at). If you show up on those tables, you’re going to sell better than if you aren’t.

This means that the digital shelves are similar to the print shelves in a way—they are reserved for books that the vendor believes will perform well—but in print, that decision is usually (but not always) made on the basis of past performance. In digital, that decision is always made on the basis of current performance. In order to get on the table that sells more books, you have to sell more books.

So how do you get your books to sell well enough to show up on the table? Well, you need to fulfill two conditions.

1. People have to want to read your book.

2. People have to know that your book is available.

With that as grounding, now we come to the question of backmatter.

Backmatter is the stuff that comes right after the end of your digital book. When it comes to an author’s career, that page at the end of the book is the most important page in the entire book. That’s how you control your digital shelving.

The moment after someone finishes your book is the point when they are most favorably inclined to you as an author. Okay, some people will have hated your book—and that’s okay—but this isn’t about them. This is about the people who read the last word of your book and sigh and hug their ereader close and think, “What a lovely book! I’m so glad I read this.”

It’s the perfect moment in a symbiotic author-reader relationship: She wants to read more of my books, and I want her to do the same thing.

So the first page after the end of my book is designed to help readers do exactly that. This is what it looks like on the books I upload to Amazon:

Thanks for reading The Countess Conspiracy. I hope you enjoyed it!

· Reviews help other readers find books. I appreciate all reviews, whether positive or negative.

· This book is lendable through Amazon’s lending program. Share it with a friend!

· You’ve just read the third full-length book in the Brothers Sinister series. The other books in the series are The Governess Affair, a prequel novella, The Duchess War, A Kiss for Midwinter, The Heiress Effect, The Countess Conspiracy, and The Mistress Rebellion (out sometime in 2014). I hope you enjoy them all!

If you’d like to read an excerpt from The Duchess War, the first book in this series, please turn the page.


Disclosure: I copied the basic idea for this from author Debora Geary, who is a marketing genius, with her permission.

That first line right there? That’s me building my future digital shelf space. If I have one book that performs reasonably well in digital, I can try to leverage past performance to get future performance. There are a handful of authors who self-publish and do very well in digital and do not have a line like that. But almost every major self-publishing author—the ones who can release a title and have it hit the top 100 Kindle list—have a line that looks like something like that.

To give you an idea of how effective this line is, I released a new book on December 17, 2013. Between December 17, 2013, and January 16, 2013—exactly one month—I have had 328 new signups for my newsletter. I’m not offering any reward except “You’ll find out when the next book in the series is available.” When I made my first self-published book (Unlocked) available, I didn’t have that line at the back of the book. In the three months following the release of that book, I had 38 people sign up for my newsletter.

At this point, I wouldn’t take a contract with a traditional publishing house unless the contract explicitly stated that this line would be the very first thing after the end of the book in all editions published, and that failure to include the line would be a material breach of the contract. I would compromise on the royalty rate and the reversion clauses first before I’d compromise on that line. That’s how important—and how valuable—I think it is.

So back to the rest of the backmatter. The second thing I’m doing is encouraging people to connect with the book in some way. Leaving reviews is one example—I’d love for people to leave reviews for my book, positive and negative, because it helps other people to find books that they like. If someone says, “I hated this book! I always hate books where there is too much sex,” someone else will see that and say “Ooh, I love books with sex!” The more information there is, the more people are talking about my books, the more people are going to say “I want to read books like that!”

I encourage people to lend the book. Not all vendors have a lending program, but I always enable it for my books when I have the choice. I’ve seen people lending my books to a friend, only to have that friend become a voracious reader who buys everything I’ve written and then buys copies for their mother and sister as Christmas gifts. Again, this is a symbiotic line—readers love to be able to share books with friends, and as an author, I love when readers share their books with their friends. (This line is customized—for instance, it doesn’t appear on the version I have for sale at Kobo, since Kobo has no lending program, and on B&N it obviously doesn’t say “Amazon’s lending program.”)

Finally, I want to make my digital shelf as broad as possible. I want people to find the other books in the series, and so I list them, one by one. The links are clickable, and again, they’re customized by vendor. There are a lot of people who will enter the series at Book 2 or 3. I want them to know what they’ve missed. And sure enough, having a list like this means that when I release a new book, I get a bump in my earlier books. The Duchess War, released in December of 2012, made more money in January of 2013 than in June of 2012, simply because I listed it in the back of my December 2013 release.

My goal is this: If a reader liked this book, hopefully she’ll want to read another one of my books. I want to make it as easy as possible for her to do so.

So what does this mean for you? If you’re self-publishing, take a look at backmatter. Look at mine. Look at the backmatter for super-successful authors in your genre. See what they’re doing, and ask yourself why they’re doing it and if it makes sense for you.

If you’re not self-publishing, go talk to your publisher. Even if they won’t put up vendor-customized clickable booklists, you might be able to modify your author biography to follow immediately after the end of your books, and then to include some of the most important lines.

Courtney Milan’s debut novel was published in 2010. Since then, her books have received starred reviews in Publishers Weekly and Booklist. She’s been a New York Times and a USA Today Bestseller, a RITA® finalist and an RT Reviewer’s Choice nominee for Best First Historical Romance. Her second book was chosen as a Publishers Weekly Best Book of 2010.

Courtney lives in the Rocky Mountains with her husband, a marginally-trained dog, and an attack cat.