How to Set Tone and Mood in Your Scenes 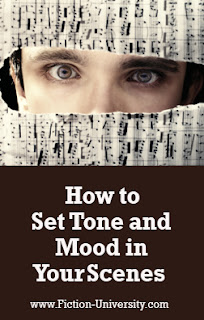 Setting the right tone can go a long way to drawing readers into your story and keeping their attention.

I'm a little weird when it comes to scary movies. I enjoy (most) of them, but sometimes I also get so tense I can't watch them. I figured out ages ago it the music that gets me, not the scene itself. It builds, pokes at my emotions, and builds the tension in a masterful way that also builds my anticipation and fear. This also happens in games during boss fights or any mission with really stressful music.

When a movie or game starts getting to me, I mute the volume and all that built-up tension drops to the floor.

What do movie scores have to do with tone and mood?


Think of tone and mood like the music in scary movies. With the sound on, the scene makes you nervous--you jump, you twitch, you tense up--and it adds to the overall mood. Turn the sound off and the scene isn't scary anymore.  It's just stuff happening in front of you.

The tone lets them know how to take certain things--are the characters serious, lighthearted, intentionally silly, etc. The playful joke is different from the snide jibe, even if it's the exact same phrase.

The mood creates the atmosphere that prepares readers for the emotional state you want them to be in when they read a particular scene.

Use the right words and imagery, and they affect readers on a deeper level, and thus puts them in the right emotional frame of mind for the scene. Just like the music in a movie.

Creating the Right Tone and Mood in Your Novel


Let's say you wanted to convey a tense, suspenseful, anything-might-happen-at-any-second tone and mood in a scene with a guy walking across a courtyard who thinks someone is following him. You might write it like:

Bob is nervous, but do you feel it? Probably not, because the word choices here tell more than they show, and they aren't specific. Let's break it down:

Walked does nothing to set tone because it's generic. It also doesn't suggest something is wrong.

Nervously looking tells us he's nervous, which distances us from the action.

At every noise is also generic and does nothing to set the scene. What noises?

Knew someone was back there tells us what Bob knows, but does nothing to show readers or make them worry that someone is back there. How does he know? What clues are telling him this?

Feel tells, though twisting pit of his stomach has a nice vibe. However, it's a common way to show apprehension so readers aren't likely to feel much emotion from that. But if it had other emotions before this point, this would have more impact.

(Here's more on Leave a Message at the Tone: Setting the Right Tone for Your Novel)

Let's swap out a few words and see how the tone changes:


Bob crept across the courtyard, glancing over his shoulder every few steps. Someone was back there. The twisting pit in his stomach was never wrong.

It might not win any awards, but it's better.

Crept suggests he's sneaking or trying to be quiet, which implies he doesn't want anyone to hear or see him. Show vs. the told.

Glancing over a shoulder is what nervous people do. It shows and let's readers figure out the motive.

Someone was back there becomes internal thought, which puts the reader more in Bob's head and thus more in the scene.

Same with the twisting pit in his stomach.

Even though this is better, it's still a little flat, right? It uses the right words to suggest worry and fear, but we're not truly feeling those emotions.

Next, let's toss out the common elements and go for more specific word choices and imagery:


Bob slowed. Sunlight filled the courtyard ahead, chasing away the shadows and exposing every potential piece of cover. No way anyone could hide out there, but that applied to him as well as whoever was behind him. If anyone was. Crap.

This gives a different sense of the situation, doesn't it?

Slowing down is the opposite of what most people would do if they thought they were being followed. It makes you wonder why he does it.

Sunlight exposes things, which contrasts the sense of the shadowy lurker. What might be seen in the light? Is this setting up a reveal?

Potential cover suggest training on Bob's part, which implies he's not just a random guy, so the person following him might not be either.

No one could hide suggests he's already thinking of a plan, and that he sees the pros and cons of the location ahead as it pertains to his situation.

If anyone was says he's not sure.

Crap shows he's not happy about that.

The word choices change the situation. Instead of a nervous guy walking across a courtyard, there's a worried guy who recognizes the dangers ahead and is trying to figure out what to do about it. A proactive protagonist to be sure, but there are also enough hints that say something is about to go down and it might not be what the reader expects.


How you describe a scene, and what your point of view character notices, sets the tone of the scene. Generic words that apply to any situation do little to create a mood. Common or clichéd words and imagery give the sense that readers have seen this before, so they know how it's likely to play out. Even if you do surprise them with what happens, odds are the anticipation of that surprise was lacking, so you miss out on the emotional punch.

Think about what your point of view characters would see and how they'd interpret it. Choose words that create the mood or tone you want readers to feel, and show them things they haven't seen a hundred times before. Don't go for the easy or familiar. Unfamiliarity creates uncertainty, and uncertainty leads to anticipation. Once you have that, you have the reader wondering what will happen next.

(Here's more on Three Things to Consider When Writing Descriptions)

And no matter what tone you're setting, "what's going to happen next?" is what keeps those readers reading.

The words you choose to describe what happens in a scene are your story's music score. They underscore the emotions of the scene and nudge readers where you want them to go. If all you do is describe with accurate, yet generic words, then you miss an opportunity to create an emotional response in your readers. You want them to feel the mood like it was background music.

Do you have any examples of a novel, movie, or game that uses great tone or mood?

Writing exercise time! (contest is now closed, but feel free to do the exercise for fun)

Let's do something a little tougher this week. In 250 words or less, set one of two tones: A scary, foreboding tone, or a happy, excited tone.

But here's the catch--you can't use any of those words, or pseudonyms of those words, in the pieces. So no frightened, scary, happy, excited, etc. Try to avoid happy or scary adjectives at all. Do it all with nouns and verbs.

And the extra challenge: Use these six words in the piece in some way.


Rock, flower, an animal (your choice), blood, laughter, and clouds.