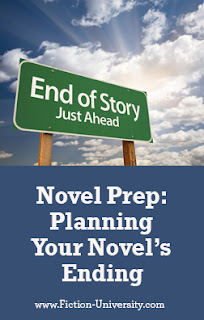 We now come to the final installment of the annual NaNo prep articles. Hope everyone going for the 50,000 words in November are just about ready to go!


Getting to “The End” of a novel is pretty satisfying, both as a reader and a writer, but there’s a lot more pressure to get there for the writer. There are many things that need to happen--plots and subplots to wrap up, and those pesky character arcs to fulfill. And then there’s the whole “satisfying resolution” to worry about.

The ending is the last 25% of the novel, so for the NaNo folks, to meet your 50,000-word goal, that's another 12,500 words. At least one of those final chapters is going to be your wrap up, though that can be a much smaller chapter. There’s a good chance that you won’t know all the specifics about your ending in the planning stage, so don’t worry. Ideas and situations will develop over the course of the novel that will help you flesh the ending out. Even if you do know exactly how the ending will unfold, you might find deeper meanings or ways to make it resonate more once that first draft is written.

We left off last time with the end of the middle (or act two). The protagonist has just gone through a deep, dark moment and made the choice to stand and fight. They’re taking the problem to the bad guy. They’ll use all the things they’ve learned over the course of the novel to outwit and defeat the antagonist. They battle it out, and win (usually), then the story wraps up and we see the new world the protagonist lives in, and the new person they’ve become.

This pretty much sums up the ending. The final march by the protagonist to get to the final battle with the antagonist. I use the word “battle,” but it doesn’t have to be an actual battle. It’s just two conflicted sides trying to win.

The pace is likely to pick up as you close in on the ending, keeping the reader hooked and the pages turning. Tensions are raised, emotions are tweaked, and the reader is fully invested in what happens to these characters. They’re desperate to know how this all turns out.

Your ending is a great place to show that all-important character growth. Remember all those flaws and weakness you gave them? The mistakes they made that messed things up in the first 75% of the novel? This is where they redeem themselves. (Or do themselves in if that’s the kind of story you’re writing). They take all those life lessons you made them learn and use them.

At some point, there’s a good chance you’ll have your protagonist face something they failed against before. Their biggest flaw or greatest weakness comes back to haunt them. It might be in the actual battle with the antagonist, or the final piece of the puzzle to get there. The moment when the reader gets to see, yes, the protagonist has learned from their mistake and will prevail.

The ending is also where many of the subplots will resolve. This is important, because if you leave too many threads hanging, you might muck up the climax, or make the wrap up feel long and anticlimactic because the story keeps going long after it’s technically over. Secondary characters arcs are also frequently resolved during this march to the antagonist.

The final battle is the biggest moment in your book, let alone your ending. No matter what form it takes, the core conflict of the story is about to be resolved. The protagonist also needs to resolve it on their own. A little help from friends is fine, but the hero needs to do most of the work. It’s their problem, they’re the protagonist, and the reader wants to see them win. Convenient or contrived actions here will kill your ending and leave your reader unsatisfied. They want to feel that the protagonist earned this victory.

Endings need to be satisfying, though they don’t need to be happy. Whatever story problem you posed at the start of the novel has to be resolved, but it can be a bittersweet end if the goal was to teach the protagonist something and not so much about the event itself. They can “lose” and still win if that loss gets them what they really needed deep down. However you set up your resolution, fulfill that promise to the reader. Give them the ending they want to see.

One common pitfall with endings is that the stakes don’t get any higher after the second major crisis. Body counts might go up, but thousands dying vs. the main characters dying isn’t actually an increase in stakes, even though it feels like it should be. Stakes go up when the consequence requires a more personal cost and will force the protagonist to make a huge sacrifice. When you plan your ending, make sure the personal stakes of the protagonist are raised as well as any big-picture stakes.

After the final battle is the wrap up. This is usually a chapter, maybe two if there’s a lot to resolve (say with a series). Lose ends are tied up (though not all or it can seem too pat), readers get to see the fates of the various characters they’ve come to love (or hate), and the new life of the protagonist is revealed. We see the change this experience has brought them, good and bad.

And then it’s over.

And that wraps up NaNoWriMo Prep. Hopefully this has been helpful and will aid you in your quest for 50,000 words, and will help with future novels as well.

Do you know your ending yet? What challenges are you facing with it? Are you ready for NaNo?