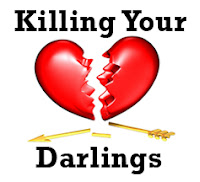 (Here's more on Hey, Still With Me? Poking Dead Scenes With A Stick, Part One)


"I can keep it if I do this..." is a warning. In rare instances you can find a way to make a favorite line or scene work, but more often it's the start of a convoluted plot that twists the story into knots just so you can keep that scene or line. Look closely at the scenes that are there to support the scene you love and determine:
No matter how good the line or the scene, if it doesn't work for the overall story it hurts that story. We've all known that person who tries too hard at parties to be the center of attention. Instead of being awesome, they end up looking awkward. Don't let your great lines be that person.